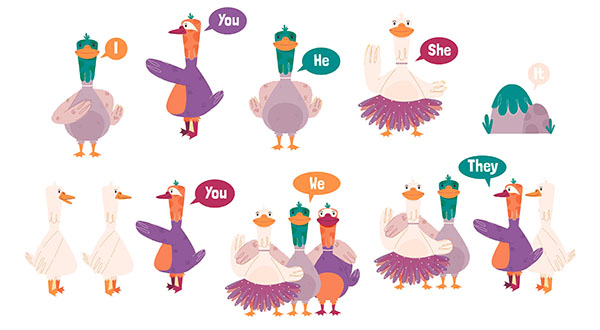 What are Personal Pronouns?

The personal pronouns in the English language are:

The main thing to remember is that these pronouns act as the subject of a sentence. In other words, they perform the action of the verb in the sentence. Consider the following examples:

Ways to Use Second Person (You) Plural

Unlike many other languages, English does not have a separate word for the plural second person pronoun (you). In other words, if I am talking to one person, I would refer to them as “you,” but I also use “you” to talk to a group of people.

This can be confusing, since it does not specify if it is one person or many. Consider the following:

As a result, today many English speakers will add a word or slightly change “you” to make it mean a group of people. They may say you all, y’all, you guys, you folks, you lot, yous(e), you-uns, or any number of regional versions, which are not grammatically necessary (since the correct pronoun is simply “you”) but can clarify meaning.

What if the Person’s Gender is Unknown?

Have you ever had to guess if you should refer to someone as “she” or “he” because you didn’t have enough information about them? For example, if someone tells you, “I went to see Dr. Smith this morning because I was feeling ill,” you don’t know if you should reply, “What did she say?” or “What did he say?”

You can write it out like this: he/she, he or she, (s)he, or s/he. However, this can become complicated.

Fortunately, there is another simple solution in the English language. Instead of guessing which personal pronoun to use, it is increasingly common to use the third person (“they”) when someone’s gender is not known. It is also used when gender is not really important to the information in the sentence or conversation. Some people even prefer this as their own pronoun.

Here are a few examples: