Pronouns in English with examples 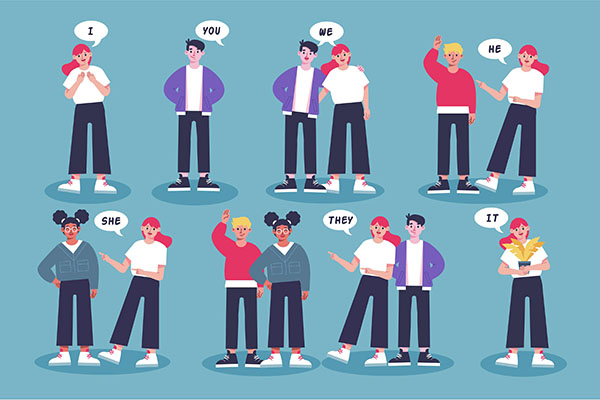 What Is a Pronoun?

A pronoun is used to replace a noun in a sentence, so as to avoid repetition. In other words, they shorten conversations or writing.

They represent handy “shortcuts” to make English more efficient, as long as the speaker/writer and listener/reader both know to what they refer.

Pronouns function simply as the replacement term for nouns or noun phrases that run the risk of sounding repetitive.

Pronouns are words that can function by themselves and refer either to the participants in the sentence (for example, I, you, or they) or to someone or something mentioned elsewhere in the sentence (e.g., he, it, or this).

There are several major categories of pronouns, a few of which we cover here:

They are used to replace a specific person’s name. For example:

They are the recipients of action in a sentence. For example:

Emphasize the subject or object of a sentence by referring to the same person or thing. For example:

Connect a phrase or clause to a noun or pronoun. For example:

Each type of pronoun comes with its own terms. To summarize these:

Reflexive pronouns are myself, yourself, himself, herself, itself, ourselves, and themselves.

Possessive pronouns are mine, yours, his, hers, ours, and theirs.

Demonstrative pronouns are this, that, those, and these.

Relative pronouns are who, which, that, and whose.