Verb types in English with examples 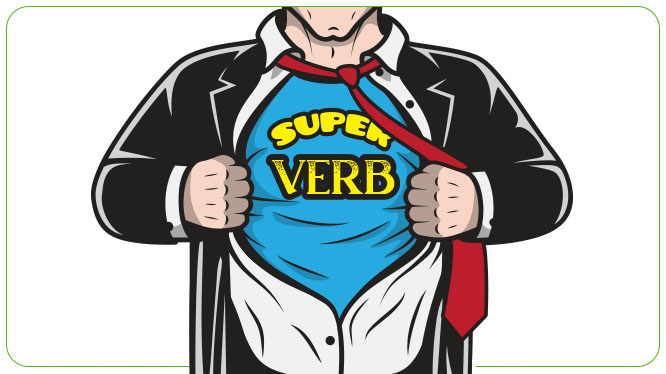 What is a Verb?

Verbs take on the role of an action word in sentences. They are a major part of any language, next to nouns. They tell us what the subject (that is, a noun or pronoun) is doing. They are considered indispensable.

Verbs tell us what is happening. In English, even a sentence of two words must have a verb (for example: “John runs.”).
Some sentences can be created using only a single verb and nothing else, since the subject is implied (for example, “Eat!” “Go!” or “Drive!”)

Typically, we think of verbs as conveying action, that is, they are “doing” something in the sentence.
But this can be misleading. Some verbs are not easily recognized as actions. Consider for example the verbs am, feel, love, hope, think, or disagree. They may express thoughts, states of being, emotions, opinions, or senses.

As you will see in this section, there are many types of verbs!

How Can You Identify a Verb?

It’s easy to identify verbs. Just look for it's place in the sentence in relation to the subject. As a general pattern, verbs usually come after a noun or pronoun. We refer to these as the subject. Consider the following examples:

English learners find it difficult to locate the verb in a sentence. The best way for this is to ask the right questions.

1st Question: Ask yourself “What is happening?”.
For example: is someone or something running, sitting, agreeing, voting, cooking, reading, jumping, thinking, and so on?

If the answer is yes, then it's safe to say that is a verbs.

Now that we know how to identify a verb, let's discover about verb types.

A physical verb is one that directly describes an action. This includes not only movements of the body but also the use of tools. It even applies to instances where something is being done but is not very visible or “active” in the usual sense.

Verbs that are referred to as mental verbs are used to convey cognitive states, such as thinking, planning, understanding, or discovering.

States of Being Verbs

State of being verbs are used to describe a situation or set of conditions and are inactive because they do not refer to a specific action being performed. They usually employ forms of “to be” (am, is, are) and are sometimes also called linking verbs.

Consider the following examples of state of being verbs:

An action verb is used whenever you describe someone doing something, that is, to express an action. However, that action does not necessarily have to be something you can see or something that is physical.

A stative verb is used when you want to describe a state, such as those related to emotions, thoughts, measurements, or the senses. One way to remember this is that they do not describe an action, but rather a state that may even be a temporary one.

Irregular verbs are verbs that take un unexpected spelling patterns in the past simple and past participle tense. Irregular verbs are actually fairly common in the English language, and you will encounter them frequently. We suggest taking some time to read through the list of irregular verbs.